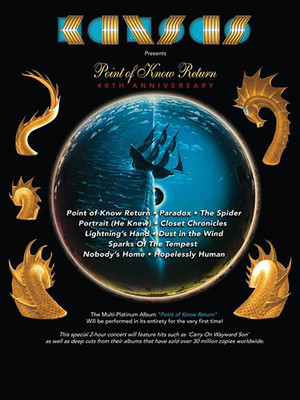 A real treat for Kansas fans

Never ones to shy away from a live show, Kansas return in the fall of 2018 with a brand new tour where they'll be celebrating the 40th anniversary of their seminal prog-rock gem, Point of Know Return, presenting the album in its entirety, alongside rarities, deep cuts and of course, some of their most enduring hits.

Their fifth studio album, Point of Know Return was released in 1977 to widespread acclaim, with million-selling lead single, 'Dust in The Wind' becoming one of the group's most popular tracks, alongside Leftoverture's 'Carry On My Wayward Son'. Considered a prog masterpiece, fans will not want to miss the opportunity to hear it played live!

I recall seeing the band back in the late 70s, God's not been paying that... more

Sound good to you? Share this page on social media and let your friends know about Kansas - Point of Know Return Anniversary Tour at Taft Theatre.