Sorry! You missed Aladdin at Procter and Gamble Hall 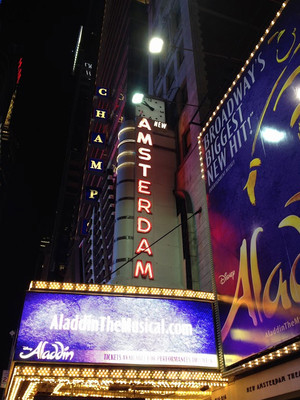 Aladdin is also touring to:

Broadway's most extravagant musical is out on tour! Based on the beloved movie of the same name, Aladdin follows a plucky young hero as he tries to win the heart of Princess Jasmine and keep his magic lamp (Genie included) from the clutches of the evil Jafar!

Featuring music by Alan Menken and a book by Chad Beguelin the Broadway production opened in 2014, and was greeted with enthusiastic reviews and five Tony nominations. Spectacular fun for all the family, the show has launched international productions in Japan, Germany and the UK.

Don't miss your chance to witness the glittering original in your home town, a revamped version of Disney's Aladdin hits the road in 2021!

WHAT IS ALADDIN ABOUT?

Aladdin is a charming street urchin in Agrabah, who, when 'exploring' the mysterious Cave of Wonders, uncovers an ancient lamp that proves to be more than just a lighting solution. He unwittingly frees the lamp's resident wacky Genie, who grants him three wishes. Transformed from pauper to Prince, Aladdin catches the eye of beautiful but bored Princess Jasmine, who longs for some adventure of her own!

But it's not all a smooth magic carpet ride, because Aladdin isn't the only one that knows of the lamp's power. Enter the nefarious Jafar and his minions, who have plans for three wishes of their own and it's up to Aladdin to defeat him to keep the Kingdom from his clutches.

Suitable for audiences of all ages but perfect for families to enjoy the adventure together!

Two hours and 30 minutes with one intermission

I coined a new phrase in the middle of this show, a lightbulb moment if you will, as I witnessed a plethora of lavish costumes and impressive sets brought to life by a giant cast of 39. This is the Disney Dollar! I wondered how other shows could ever com

Wow this show was incredible. It is by far the best show I have ever seen.... more

Sound good to you? Share this page on social media and let your friends know about Aladdin at Procter and Gamble Hall.