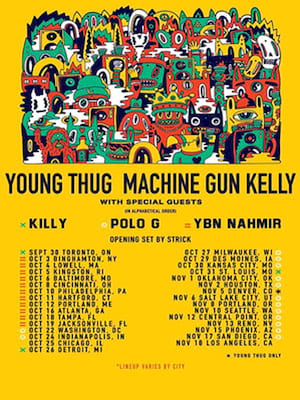 Rappers Machine Gun Kelly and Young Thug will join forces for a countywide tour this fall. The rappers are both known for their individual styles just as much as their chart-topping rap songs and together will put on outstanding and exciting shows not to be missed. Artists Killy, Polo G and YBN Nahmir will be joining the stars on selected dates.

Young Thug first hit the music scene with his series of mixtapes in 2011. He has since gone on to win a number of MTV Video Music Awards, American Music Awards and a Grammy Award. His upcoming album 'So Much Fun' will be released later this year.

Machine Gun Kelly began his music career with his 2006 mixtape and has won several Ohio Hip Hop Awards amongst receiving many other awards and nominations. The rapper's latest album 'Hotel Diablo' was described as being "dark, heavy-hitting and provocative with little bursts of humor scattered throughout" by Billboard and "a personally revealing project" by NME.

Just went to mgk young thug concert in Jacksonville fl with my wife who... more

Sound good to you? Share this page on social media and let your friends know about Machine Gun Kelly and Young Thug at PNC Pavilion.