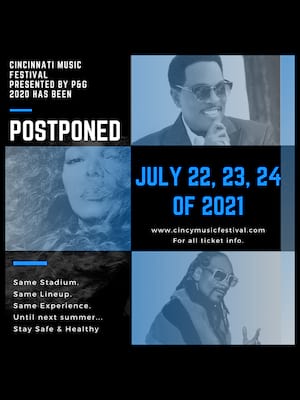 For most visitors and concertgoers, the last weekend in July is the best time to visit Cincinnati, tour downtown and enjoy some of the best R&B music of our time.

First held in 1962 under the moniker Ohio Valley Jazz Festival, the Cincinnati Music Festival has evolved over the decades into a spectacular and hotly anticipated event on Cincinnati's riverfront. Now boasting the best of the best of modern R&B, jazz, soul and hip-hop, it's star-studded roster of performers includes Whitney Houston, Lakeside, Patti Labelle, Luther Vandross, Aretha Franklin, Earth, Wind and Fire, and Steve Wonder amongst others.

Don't miss the one and only Janet Jackson when the festival makes a triumphant return in the summer of 2021.

Sound good to you? Share this page on social media and let your friends know about Cincinnati Music Festival at Paul Brown Stadium.