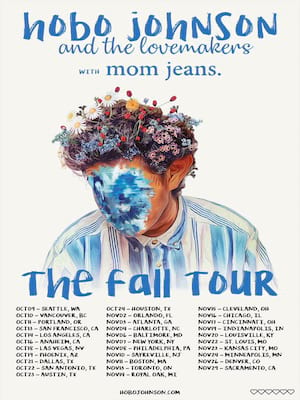 Hobo Johnson plays what he describes as a kind of "Sad Boi Hip Hop", which is an accurate descriptor. From his slam-poet-rapped vocals, emo influences, hip-hop production, minimal and ambient instrumentation, overly dramatic themes, and bluntly honest ly

Alternative hip-hop artist Hobo Johnson began performing music at the young age of 15. Since then, he has enlisted the help of his band titled 'The Lovemakers' and released three studio albums, with the third 'The Fall of Hobo Johnson' being released earlier this year. Johnson has received four Sacramento Area Music Awards including Artist of the Year, Best Hip-Hop/Rap, Best Emcee and Best New Artist.

Johnson's latest album has been described as "a mixed bag of broken hearts, bizarre tales and awkwardly relatable moments" by NME and an "odd combination of emo, indie rock and sad-boy trap-rap" by Riff Magazine.

On select dates, Californian rock band Mom Jeans will be joining as an opening act.

Tim Crosby: “Hobo Goes All In”

Sound good to you? Share this page on social media and let your friends know about Hobo Johnson at Bogarts.