Sorry! You missed Hellyeah at Bogarts 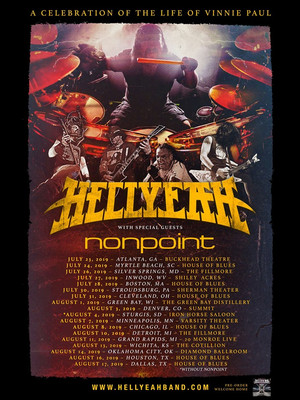 A Celebration of the life of Vinnie Paul

Heavy metal quintet Hellyeah can trace their unholy origins to the 2000 Tattoo The Earth Tour, which brought together Mudvayne, Slipknot, Slayer, Sevendust and Nothingface. When Mudvayne frontman Chad Gray and Nothingface axeman Tom Maxwell got chatting about the possibility of forming a supergroup, scheduling conflicts meant they couldn't get things off the ground immediately, but six years later they added drummer Vinnie Paul, bassist Kyle Sanders and guitarist Christian Brady to the roster and released their hotly anticipated eponymous debut album.

Five albums later and the outfit are getting ready to release their latest studio album Welcome Home, the last Hellyeah compilation to feature the legendary Paul, who sadly passed away in 2018. Stone Sour's Ray Mayorga joins the remaining members for a bittersweet summer tour celebrating the life of the Pantera drummer.

Seen Hellyeah? Loved it? Hated it?

Sound good to you? Share this page on social media and let your friends know about Hellyeah at Bogarts.