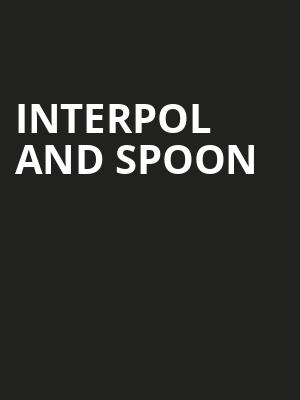 Why See Interpol and Spoon?

It's two for the price of one! American rockers Interpol and Spoon are heading out onto the open road together where they'll be going coast-to-coast on their 'Lights, Camera, Factions' tour. Is two bands enough? Not for this tour - Indie pop trio The Goon Sax will be opening each show! Expect to hear tracks off Interpols forthcoming seventh studio album, along with new material from Spoons recently released tenth studio album 'Lucifer On The Bed'.

Firmly established as one of the pre-eminent indie bands of this era, Interpol's brand of edgy indie has earned the band a wide fan base, with their first two albums - 'Turn On The Bright Lights' and 'Antics' - securing them a top spot in the playlists of music lovers around the world. Interpol saw a major change to their four-person line-up in 2000 when founding member and bassist Carlos Dengler left the band, but have continued all the same, releasing their first album as a trio in early 2014.

Formed in Austin, Texas in 1993, they have steadily risen through the ranks, gaining fans and commercial recognition as it comes, but success has never been the heart of their journey as a band, as exemplified in myriad interviews with the laid back band, they are just happy to make good music, capturing emotion without sentimentality, occasionally landing an absolute blockbuster!

Sound good to you? Share this page on social media and let your friends know about Interpol and Spoon at Andrew J Brady Music Center.