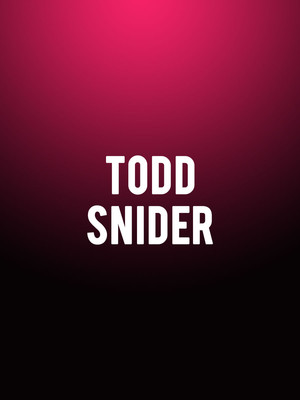 Whilst Todd Snider can trace his roots back to Portland, Oregon, his free-wheeling troubadour ways and bluesy, Americana-tinged sounds recalls the distinctly southern style found in Austin, Houston and Atlanta. Exuding wit, warmth, humour and optimism, his music is a salve for troubled times - at turns political and deeply personal, his songcraft has provided a refuge for his own struggles with drug, alcohol addiction and depression.

After moving to Memphis in the 80s, spearheading a residency at a local club called the Daily Planet and establishing himself as a driving force of the local music scene, Snider was discovered by prolific singer songwriter Kieth Sykes and it wasn't long before a record deal and label signing came calling. After the release of his debut album Songs For The Daily Planet in 1994, he hit the road on tour and is still trucking, writing, performing and traveling to this day.

Sound good to you? Share this page on social media and let your friends know about Todd Snider at 20th Century Theatre.