Sorry! You missed The Deplorables at Taft Theatre 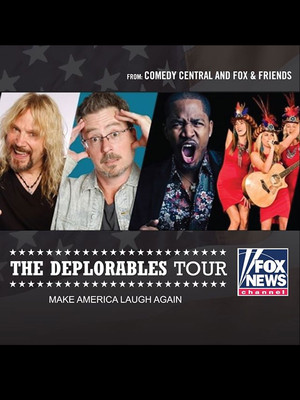 Taking aim at the left and pulling no punches!

Why See The Deplorables?

Every coin has two sides and so does politics! Making a light-hearted mockery of those leftie liberals, The Deplorables comedy gang is ready to make the nation belly laugh when they bring their opposing observations and stand-up comedy skills to venues around North America on tour.

The Deplorables cast features well known and politically active Trump supporting, conservative-voting comedians including political commentator and comedian Terrence Williams, Fox regular Michael Loftus, Comedy Central's Steve McGrew, "Guitar Guy" Brian Haner and The Deplorable Choir, The Donald's very own singing cheerleaders and viral YouTube sensations. Buckle up and get ready to celebrate the American Dream with a dash of satire, a drizzle of music and a whole lot of old-fashioned fun.

Seen The Deplorables? Loved it? Hated it?

Sound good to you? Share this page on social media and let your friends know about The Deplorables at Taft Theatre.